B2B marketing is 5x more persuasive with customers than non-customers

A new study measuring the impact of B2B marketing found that it influences a majority of a company’s current customers (by 55.6%) but has only a minimal effect on its non-customers (10.7%).

Conventional marketing wisdom holds that a company's current customers will engage more with its marketing than will non-customers. For example, if you own an HP computer, you will likely pay more attention to HP ads, promotions, and social media. This study found that the reverse is also true: potential customers who do not own products from a company will pay significantly less attention to marketing from that company -- in fact, five times less.

Media technology guru John Luff of HD Consulting suggests that lack of time plays a role: “The motivation might be there to learn about products from new companies, but the time is not. With the time crunch, it is inevitable that you look to the people who are spending the most time with you already, and not chase other suppliers. There isn’t time to devote to the sales process and build new relationships.”

According to Tom Canavan, Senior VP Strategic Development at Signiant, B2B suppliers themselves may contribute to the disparity: “If you are an important customer, you often get more information on new products, more tutorials, and more access to key people in a supplier’s organization. These are all motivating factors that keep existing customers loyal, and non-customers never receive these. As only current customers gain access to these interactions, continuing to be a customer can be a self-fulfilling prophecy.”

This study raises the question, “Is the messaging of B2B technology marketing unintentionally skewed toward existing customers?” Marketing strategist Josh Gordon, of the Josh Gordon Group, says the potential is there: “Companies typically receive far more feedback from current customers than non-customers. As a result, over time their marketing may reflect the values of current customers and have less appeal to non-customers. Some companies even view non-customers as simply ‘people who have not yet bought from us,’ when in actuality they might need a different approach. 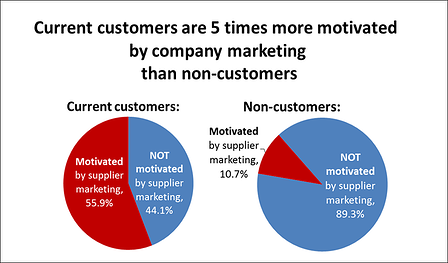