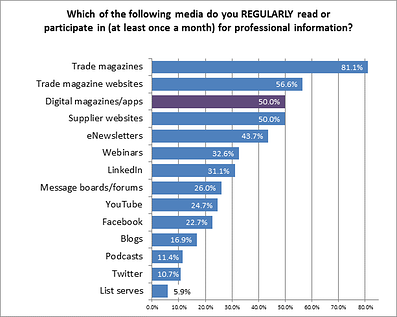 Some marketers have written off trade magazine advertising as yesterday's news. But a just-released study of broadcast technology buyers from the Josh Gordon Group found magazines and digital magazines among the most frequently used of all media.

When potential buyers were asked which media they regularly read or participate in at least once a month, print trade magazines topped the list with 81.1% of respondents. Trade magazine websites were second with 56.6%. After that, industry supplier websites and digital magazines tied for third place, both with 50% of respondents choosing them.

This is a meteoric rise for digital magazines.

On a personal note, a few years ago I worked with a publication in this market were we could not get arrested selling ads into our digital magazines. Readers were just not excited about them. Open rates for the digital editions (the % of readers opening an reading an issue) were in the single digits. But the introduction of the iPad in early 2010 and better digital magazine technology has dramatically changed this. Today, half of the survey respondents say they read digital magazines at least once a month. This ties them for third place as the channel potential customers are using most frequently. Three years ago this would have been unthinkable.

When I asked survey respondents the reason for this change, their response was universal: the introduction of e-readers.

According to Joe Balkan, Director of Engineering, Western Region, at Hearst Television, iPads and tablets have a special place in this market: “A lot of our people have them because we are deploying them in news environments and doing additional things with second screen applications. I think if all of the tech publications would make themselves available in iPad, iPhone, and Android environments, more engineers would read them whenever they have time, instead of listening to music.”

Some who have seen this study were surprised to find low frequency of engagement scores for social media: LinkedIn was picked by 31.1% of respondents, Facebook 22.7%, and Twitter 10.7%.

In B2B Marketing today social media has the buzz. But at least in this market, magazines, both print and digital, have the readers.

This finding is from the study, Improving Marketing Effectiveness, which is based on 1,128 responses, and rates the marketing of 34 BtoB broadcast technology suppliers. Download the study for free. This post refers to Finding #8 of the study.