When marketers look at you, what do they see?

This article ran on the Broadcast Engineering magazine website August 8, 2013 as the editor’s pick of the week:

It is a market researcher’s job to research potential customers like bugs under a microscope. When they look at television and broadcast professionals, what do they see?

It is a market researcher’s job to research potential customers like bugs under a microscope. When they look at television and broadcast professionals, what do they see? Last year, the Josh Gordon Group studied the effectiveness of marketing in the US broadcast industry. They evaluated the marketing effectiveness of the top 34 broadcast suppliers. Here are some insights they uncovered. Do you agree with them?

You often ignore marketing about products you do not own

The study found that the customers of each broadcast supplier rate that supplier’s marketing much higher than do its non-customers. This means that if your facility owns a Miranda router, you probably find marketing materials like ads, webinars, and emails from Miranda much more interesting and influential than if your facility does not own a Miranda router. But the study went even further, finding that most non-customers of a supplier are largely unaffected by that supplier’s marketing. When all the non-customers from all 34 companies were averaged together, only 10.7% reported being impacted by marketing from companies whose products they do not own.

You read a lot of print and digital trade magazines

Are magazines dead? Not in the broadcast market. Despite the drop-off in ad pages, magazines are the most frequently referred-to medium, with 81.1% of respondents looking to them every month for professional information. See Table 1 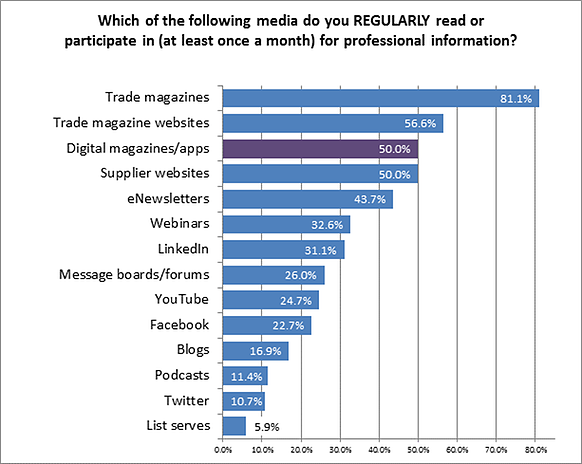 The next most frequently used medium was trade magazine websites, at 56.6%. Then a surprise: Digital magazines tied for third place with 50% of respondents saying they refer to them monthly.  Interviews with industry gurus confirmed that many broadcast facilities buy tablets for their engineering staffs because of involvement in second screen content delivery, but it seems that those devices are also being used to read some digital magazines along the way.

Here are some company ratings from the study:

The supplier company with the…

The study focused on just the broadcast technology market but earned national attention as the first B2B study to call attention to: the ineffectiveness of marketing on non-customers, the impact of the shift away from third party media, and the growth of digital magazines. The Josh Gordon Group is currently conducting another study, based on the same methodology, for SIA, the Security Industry Association.