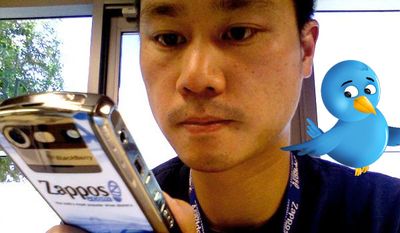 At the time, Amazon was selling many products online: books, consumer electronics, movies, toys, and tools. Why spend almost a billion dollars just to add shoes when Amazon could have easily added a shoe line of their own?

Jeff Bezos, CEO of Amazon, said he was motivated to buy because Zappos had a unique corporate culture and brand. But it was Hsieh's ability to communicate the essence of these using Twitter that captured a national audience and created a competitive selling advantage. Hsieh opened his Twitter account in June 2007 and by 2009 had over 1.5 million followers, one of the 100 most followed in the country at the time.

It was surprising to many what Hsieh did NOT Tweet about: shoes, online retailing, or special shoe offers. In fact, Hsieh only owned 10 pairs of shoes and was rumored not to know much about any of them.

Here is what Hsieh did Tweet about: His obsession with excellence in customer service and his unique perspective on a company culture/philosophy that could provide it. Huh? Why was Tweeting about this, and not about shoes, such a brilliant content strategy? Two reasons:

1. It was unique. There are thousand of websites, blogs and Twitter feeds about shoes. One more would have not have stood out. But as a CEO Tweeting about his obsession with customer service, Hsieh was the only game in town.

2. It impacted the online shoe buying process. At the time Hsieh started Zappos, many companies had tried and failed to sell shoes online. Selling books online is easy because the book you buy in a store is the same as the book you buy online. But with shoes, the fit is critical. You can try shoes on in a store, but not online. Hsieh had to convince the world that the customer service at Zappos was so extraordinary it could help people find shoes that fit by talking to them on the phone or compensate quickly if the shoes didn't fit. The first online shoe buyer who bought from Zappos took the risk that the online retailer had a customer service that could overcome the “fitting” problem. Customers who bought into Hsieh's obsessive view of customer service were more likely to give online shoe buying a try.

One more thing, Hsieh used Twitter to tell a whole story, not just share a series of short, clever Tweets. Here is his explanation:

"Think of each tweet as a dot on a piece of paper. Any single tweet, just like any single dot, by itself can be insignificant and meaningless. But, if over time, you end up with a lot of tweets, it’s like having a lot of dots drawn on a piece of paper. Eventually there are enough dots for your followers to connect them together. And if you connect the dots, in the aggregate it paints a picture of you and/or your company, and it’s that total picture that is your brand."

The essence of a great content strategy is that it both attracts target individuals and motivates them to buy. Hsieh's Twitter program did both. Think about your organization's content. Does something bigger happen when you connect the dots?