How ideas sell in B2B marketing

As a persuasive element in B2B marketing, ideas are powerful, tangible, misunderstood, and underused. I loved the first few lines from Christopher Nolan's hit movie "Inception" because they dramatize just how influential ideas can be:

What is the most resilient parasite?

A single idea from the human mind can build cities.

An idea can transform the world and rewrite all the rules.

How do ideas actually sell? Here are the first few lines from the chapter on selling with ideas from my book "Presentations That Change Minds": 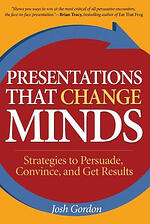 On March 19, 1999, Steve Forbes entered the crowded field as a candidate for the Republican nomination for President of the United States. There were nine candidates running and Forbes’ entry would made it a field of ten. The son of publishing magnate Malcolm Forbes, Steve was little known in national politics and most observers bet his only chance of winning on massive spending from his personal fortune.

But the unique advantage of personally bankrolling a campaign vanished when rival candidate Morry Taylor, a millionaire wheel magnate from Quincy, IL, spent about $1.5 million of his personal fortune on TV ads in the early days of the campaign.

Despite the odds, Forbes shot past eight of his rivals in the first few primaries to become the solid second place contender behind Bob Dole, the long-standing US Senator from Kansas.

Most credit the success of Forbes’ campaign to his ability to present new, compelling ideas that challenged his audiences. One idea, the flat tax, eventually took center stage and became almost synonymous with the Forbes campaign. USA Today reported, “Dole pokes fun at Forbes for being a one-note candidate: "You ask him about your headache, he gives you his flat tax message."

The story of how Steve Forbes, a virtual political unknown nationally, could enter a crowded field and have a solid shot at winning the Republican presidential nomination is the story of just how powerful an idea, skillfully delivered, can be.

The essence of using an idea to persuade is to sell an audience on a unique idea which, if accepted, gains acceptance for your candidate, product, or proposal. In short, buy my idea, buy what I am selling.

If you bought the idea of the flat tax back in 1999 you likely voted for Forbes. In the same year, if you bought the idea that the best value in computers was in buying direct from a manufacturer, you likely bought from Dell Computer. Before you start, ask, “If they buy my idea will they buy what I am selling?”
Consider these four ways an idea most often results in a sale:


1. Idea ownership. Steve Forbes “owned” the idea of the flat tax. If you wanted it as part of your future, he was the guy who could deliver and you had to vote for him.

2. Sell an idea as feature. In 2003 Seachange Technology introduced a new idea to structure video storage by using a ring pattern instead of the commonly used linear structure. If IT audiences bought the idea of the ring structure, they had to buy from Seachange, the only supplier who had it.

3. Implementation. An ad agency recently proposed a new idea for a marketing campaign targeting senior citizens. Because the agency had extensive and unique knowledge and experience implementing programs like the one proposed, they felt confident they would get the contract if the client liked the idea.  The client might say, “OK we love the idea.  Who can make this happen?”

4. Change that requires specific expertise. A technology company proposed using new digital technology to change the workflow at a radio stations. While many suppliers offered the equipment necessary, implementing the changes in workflow required specific expertise that only this company could provide.


What idea can we advocate which, if accepted, generates preference for our product or service?

Have ideas been used to manipulate?

Many times. In the 1960's Shell Oil sold the idea that an ingredient in their gasoline, "platformate," gained cars extra mileage. Was it true? Yes. In the dramatic 60 second TV spot that follows Shell sells this idea:

Shell correctly assumed that most Americans had little understanding of petroleum products and in the ad failed to mention that all brands of gasoline had platformate.

But if you bought the idea that an ingredient in Shell gasoline extended gas mileage would you buy your gas from Shell? Many did. That's a pretty resilient parasite.