Digital magazines: the worst possible digital ad media...except for all the others

Winston Churchill described democracy as "the worst form of government...except for all the others that have been tried." With apologies to all the history buffs out there, I'd like to make the same case for digital magazines.

I've heard it all: digital magazines have slow turning pages, take too long to load, are hard to read on a computer screen. But there are problems with every new digital media.

But the findings from our study "The Case for Advertising in Interactive Digital Magazines" that were recently picked up by marketing intelligence giant, eMarketer,illustrate this point.

This is no small deal. eMarketer, reviews thousands of research and data sources, every business day, and distills out the most important findings for their subscribers.With a paid audience of 140,000 they are a powerhouse in the e-marketing world.

In the findings they are now sharing, readers of interactive digital magazines were asked to rate their experience with advertising in different electronic media as being "helpful or interesting", "ignored most of the time", or "having a negative impact on their experiences."

Cases of online readers training themselves to ignore banner as is well known. But not all kinds of digital media are targeted like this, ads in interactive digital magazines least of all:

Here are the three charts from eMarketer that make the point:

There is lot of negativity with ads that follow the "push" model. But interactive digital magazine are a push media that do not suffer the negative scorn of digital users. 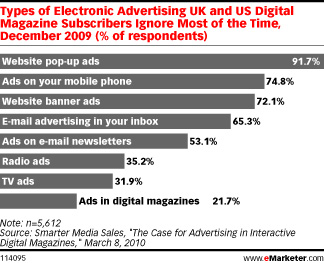 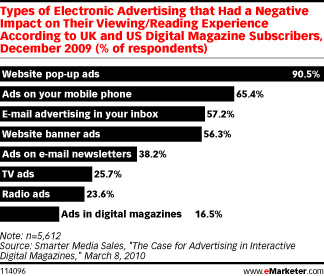 FYI, eMarketer picked up total of 10 charts from this study. Click here to view them all.