Jobs Vs Gates. How Jobs puts his idea in your mind, not just on the screen 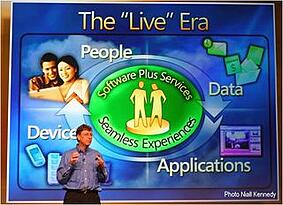 While the graphic contrast is striking, so are how the slides get flowed during a presentation.  Jobs uses his slides in a sequence to involve his audience.

Take the challenge of selling a new idea that emerges when three or four elements combine.

The common approach that Bill Gates (as well as 90% of presenters I have seen) is using above is to show all elements on the screen with arrows linking them and then explain how each comes together to form the new idea.
Steve Jobs took this same "several elements create a new idea" challenge, but instead, used a sequence of slides to get the audience more involved during his recent presentation that introduced the iPhone.

As Jobs returned to the stage at MacWorld, possibly to introduce a new product, he surprised the audience by announcing that Apple was introducing not one, but three revolutionary new products. 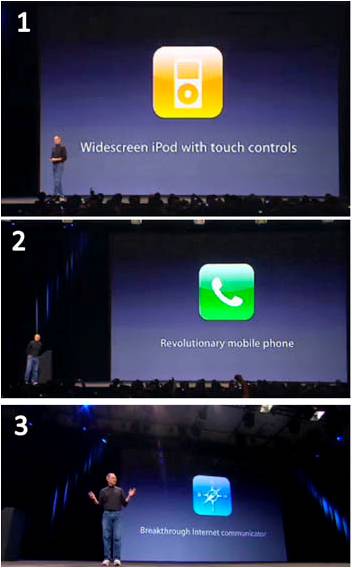 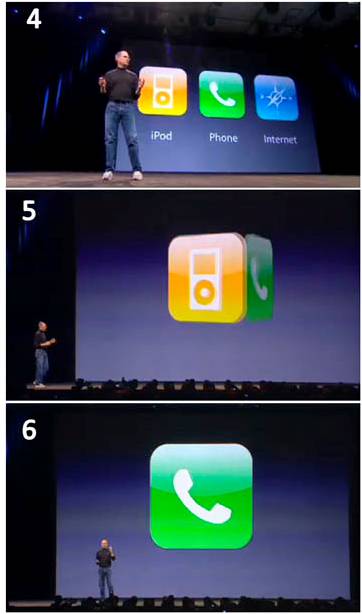 He went on to list all three (shown left 1 to 3) calling each "revolutionary" as he did.

Then as the screen (4) showed the three new products just named, Jobs repeated those product names with a chant like pacing, "An iPod, a phone, and an Internet communicator."

As he did, the graphics representing the three products morphed into a single 3D shape (5) which started to slowly rotate in the center of the screen.

Mid way through Job's third repetition of the new products, ("...an iPod, a phone...") he stopped and looked knowingly at the audience. The audience laughed appreciatively. Jobs paused and asked, "Are you getting it?

Jobs held up a single finger (6) and said,”These are not three separate devices this is one device, and we are calling it iPhone. Today Apple is going to re-invent the phone, and here it is!"

Bill Gates showed the relationship between the elements of his idea by displaying them on a screen graphically linked with arrows.

Steven Jobs used a series of simple slides to surprise and involve the audience and ultimately to let them "see" the idea in their minds. Jobs never actually displayed an "elements with linking arrows" graphic to explain his idea, instead the idea was build in the collective minds of his audience, one slide at a time.