Surveys can add persuasive power to a marketing campaign. They sell not by overtly asking for an order, but by creating the “persuasive facts” that customers use to make buying decisons. 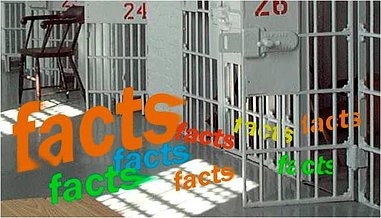 Call me skeptical, but having crafted hundreds of surveys that sell, when I hear a "persuasive fact" I want to know who created it, what bias it has, and what its creators are trying to sell me.
Here is one such "fact" I've heard for years:

It first was introduced in 2002 as part of a study created by the "Justice Policy Institute", whose stated mission is “to promote effective solutions to social problems and to be dedicated to ending society’s reliance on incarceration.” A high minded organization, but not one without a bias on the topic.

The report compared two government statistics: In 2000, there were 791,600 black men behind bars while only 603,032 were in college. The numbers dramatized the shameful condition of American black men at the time.

But this "fact" should not be used today for two reasons:

First, it is no longer true. The same government statistics released five years later, in 2005, showed 864,000 black men in college and only 802,000 in prison. Still terrible numbers, but progress had been made, and as of 2005, a small majority were going to college.

But the bigger reason is that this fact misleads as it is an apples to oranges comparison. Attending college and going to jail are different life experiences that happen in different time frames. A majority of people, black or white, go to college only between ages 18 to 24, whereas the "opportunity” to go to prison can happen anytime throughout a life.

Comparing numbers of individuals of any group attending college, to the number attending prison, will naturally skew toward prison.

If you make the "fact" about black men "apples to apples" by limiting the sample to just black males of college age, the remaining fact just doesn’t sell:

"There are two and a half times more college age black males attending college, than there are in prison.”

But think about how infuential this fact has been.

In B2B marketing surveys can be even more persuasive. Unlike consumer buyers who are more frequently swayed by impulse or emotion, B2B buyers like to see facts. If it is your organization providing big picture facts about your industry or product category, you gain tremendous stature.

But it is more than just "feel good." If survey findings are posted on your site they can significantly add to your SEO ranking on Google. Last year, when Google released their Panda algorithm changes, they called content based on research as the kind they hoped their changes would benefit. On “The Official Google Blog” they explained the changes would lower the ranking of some websites websites then added, "At the same time, it (the Panda changes) will provide better rankings for high-quality sites—sites with original content and information such as research, in-depth reports, thoughtful analysis and so on..."

Again, I state that surveys are the most persuasive sales agents on the planet. If you are not using them as part of your marketing strategy to advocate your organization’s ideas and products, well, call me skeptical again.


Review some of our persuasive surveys