Hurricane Irene was bearing down on New York City, where I live, so I was clicking through the cable channels looking for news.

A CNN meteorologist said the path of the storm was heading for New York. Great, tell me something I didn’t know.

An MSNBC meteorologist had the same information but was in a storm center surrounded by a lot of hi-tech monitors. He must know his stuff.

A local TV station had a guy I had never seen introduced as, “the weather man you have trusted all these years.” I’m not sure I’ve ever trusted a weather man.

The Fox station had a reporter broadcasting from a New York City subway station which had been just closed because of the approaching hurricane. She was interviewing a British family who were heartbroken to have their family vacation cut short. Their disbelief that the legendary subway system of New York, one of the greatest on earth, could be humbled by a storm was palpable. As a New York City resident I could totally relate. I sympathized with the tourists who had had their lives disrupted, just as mine was being disrupted.

By realizing that television is fundamentally an emotional medium Fox had created content that got to me on an emotional level. As the other news organizations fought out over which meteorologist had the best credentials, the most gear, or market longevity, Fox was broadcasting the emotional side of the story. In case anyone has not noticed, CNN slips further behind while Fox is winning the cable news ratings wars.

CNN Has Lowest Rated Week in the Demo in 20 Months

With Fox’s right leaning commentators and Republican connections the political implications of this, cannot be underestimated.

At trade conferences I hear CNN spokespeople defend their low ratings compared to Fox in the following ways:
“Right wing issues are more black and white and are more easily dramatized.” Ridiculous! A content strategy first attracts an audience, persuasion comes second. CNN is not attracting an audience!

“Offering a balanced approached is naturally is going to be less dramatic.”
Dumb! Dumb! Dumb! it's not true! 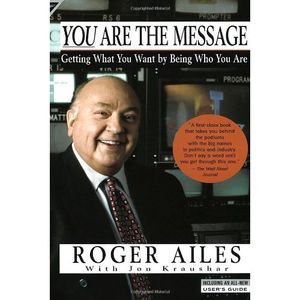 In case anyone at CNN sill cares about ratings, it is easy to uncover Fox’s secret content strategy because Roger Ailes, the man who build Fox from the ground up, published a book where he explains it. The parts of the book about television have nothing to do with left vs. right wing politics and everything to do with attracting audiences, gaining attention, and persuading.

Ailes recognizes that TV is an emotional medium and human beings, are emotional creatures. Here are some quotes from Ailes’ book, You are the message.

“Emotion is the double-edged sword of communication. When emotion is positive and genuine, there is no more constructive and powerful force of persuasion. But when emotion is negative or insincere, it creates a wall between the person sending the message and those receiving it.”

“People want to see a communicator have a range of emotions.”

“… facts provide the information and emotion provides the interpretation. You’ve got to bring something personal to the communication process. Otherwise, you’re wasting people’s time. You’re wasting your own time. To be a really good communicator, you have to start by knowing how you feel personally about what’s going on. Then, once you’re aware of your own emotions, you can more easily communicate in the right tone to others.”

CNN takes pride in not being politically left or right leaning and tries to run stories right down the middle of the political spectrum. Yawn. There is a huge difference between analytically balancing the left and right perspective versus passionately seeking the greater truth that supersede them both. Where is the passion CNN? It's all around and you ignore it. Go to any journalism school and hire the young passionate journalists desperate to fight for the greater truth that supersedes both left and right political agendas. Hire investigative journalists willing to risk it all to find stories that people can believe in. Are there any Woodward and Bernsteins at CNN today? I don't think so. There is no passion in mitigating between left and right. If you want ratings...forget the failed content strategy of balancing between them. Go back to your journalism roots and fight for the truth.

The news experts who say that Fox is winning the ratings war because they have a right wing bias are simply wrong. Fox has found its passion, and that attracts an audience. CNN has not.