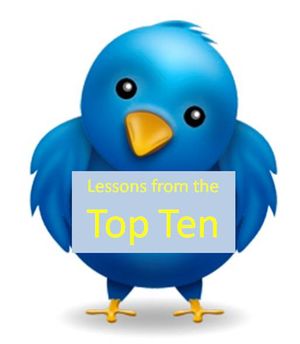 In social media circles, retweets are great currency. If you can create content, even if it’s under 140 characters long, and retransmit it through hundreds or thousands of individual Twitter accounts, it is communication gold.

The top 10 retweets of 2010 give insight as to what magic the top performers contain. Many are from celebrities, but that alone is not the secret sauce considering the thousands of tweets from celebs that did not make the cut.

First, let’s look at the basic nature of the content contained in the top ten tweets:

So personal connection, humor, and wisdom, ruled the top tweets. Tweets about a personal mood, personal experience, real time experience, or news item, did not make the cut.

But there were more ingredients.

Each of the top tweets, in their own unique way, captured a universal feeling, moment, idea, or bit of wisdom for many.

Stephen Colbert used humor, but his “tweets are now gurgles” quip defined the frustration we all felt about the BP oil spill. Lady Gaga’s tweet defined her whole unique performance attitude that has mesmerize millions, while the fake Al-Qaeda tweet poked fun at Osama Bin Laden, something we all like to do.

In conclusion, be universal.

Find a way to make a universal personal connection. You do not have to be a celebrity if you tap into a universally known person or personal experience. Few know the Tweeter behind "Shit my dad says," but everyone has a dad. Few know the identity of the fake Osama from Al-Qaeda, but everyone knows who he or she is pretending to be.